It was at a certain point, over our weekly tea together, that Mécia de Sena and I would speak about our wish to do something to celebrate Jorge de Sena's centenary. We generally spoke of "cousas e lousas" as Machado de Assis would sometimes write, and as the years passed, we would speak about our wish list for the commemoration. Antonio Candido, who had been in Jorge de Sena's Ph.D. committee at Unesp, (and also one of the Sena's daugther's godfather) came often to our thoughts (and phone calls). Would he come, being himself, in his late nineties? That splendid generation of literary critics, writers, visual artists, was almost entirely gone. At some point, I toyed with the idea of tracking down Mr. Jaime (Seu Jaime, as he was known at the University of São Paulo, when I was a student). A bookseller we all loved, with his mobile library of incredible books to sell and who would find you all the rare things you might need or (most often the case) want. He was a character himself, Nobody knew for sure, for how long he was selling books in that room at the Faculdade de Letras. Maybe forever. I myself possess a História da Literatura Brasileira by Nélson Werneck Sodré, whose first page has a dedication to Gylberto Amado in blue fountain pen ink. Perhaps Amado had not liked the book.

When Jorge de Sena left Brazil for the United States, he also left a debt to Seu Jaime, and asked, in a letter for a friend, that the debt be paid. Seu Jaime could have given us a list of all the books he had sold to Sena. The fact that separated by generations, time, space, I came to meet Mécia and that we had even Seu Jaime to share, among so many other people we knew in common (friends and acquaintances), established, at first, and renewed, every week, a link that brought us back in time. With a shared sense of loss, no doubt, but also with all the strenght of remembrance.

As we kept talking about what we would do with the one hundred years of Jorge de Sena, the pleasure was always in remembering. Mécia de Sena kept Jorge de Sena alive, with her management of his publications, careful editing of his works, and so many things more. She kept the house as if he were alive: the office with the typewriter on the desk, the rocking chair near the LPs. She was in charge of the rolodex, the letters, the filing.
Ó de casa! I would say, consciously using an almost archaic expression, as I arrived at the door. Ó menina!, was always the answer. The door was habitually kept open. The table was already set with the white tea cups.

Mécia could not participate in the colloquium prepared for him. She was still alive, and would pass away not long after. I know she would feel honored with the choice of participants, and their brilliant, original and scholarly contributions to Jorge de Sena's body of criticism. Among them, K. David Jackson, who had been Jorge de Sena's student and kept a warm friendship with the family and most especiially with Mécia, after Jorge de Sena died.

I would like to thank all of those who made our colloquium possible, and which now makes our Volume 7. We thank the Dean of Humanities and Fine Arts, of the University of California, Santa Barbara, The Head of the Department of Spanish and Portuguese, Sílvia Bermúdez, for her immense help and coordination, our staff who ran all details so smoothly. Finally, a special mention of gratitude for the support received from the Gulbenkian Foundation for this colloquium and also for its continued support of the Portuguese Program. 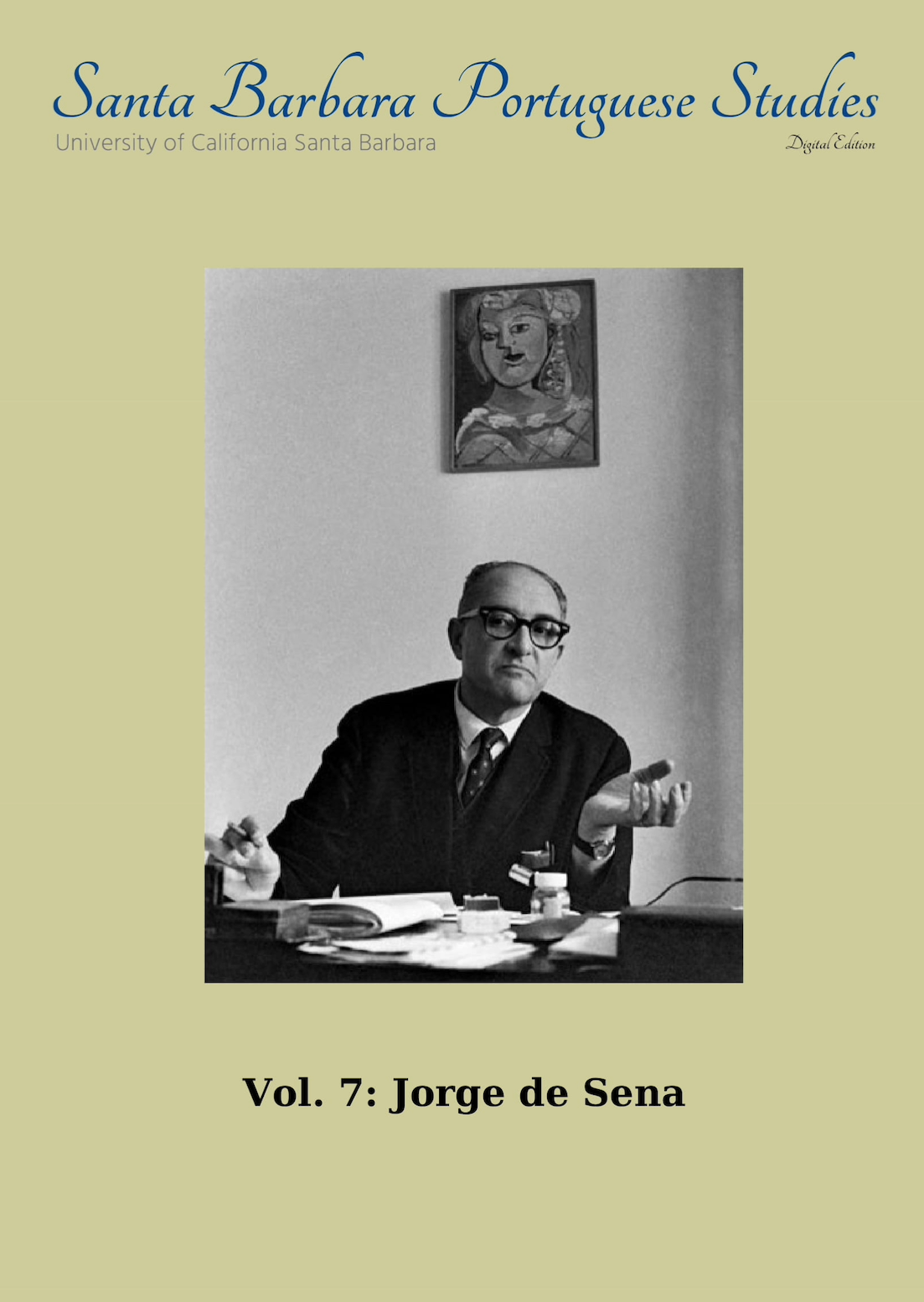